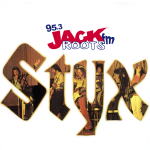 Where do I begin with Styx?  I guess I’ll start by saying they were a band I was shying away from doing on Roots because of knowing where it would end up (Domo arigato, Mr. Roboto and beyond).  I’ve always been more in the Tommy Shaw camp instead of Dennis DeYoung…but after prepping for this week’s show, I think my favorite era of Styx is from before Shaw was even in the band (especially musically)!  I really enjoyed their first two albums and Equinox.  The double guitar attack of the late “J.C.” Curulewski and J.Y. Young had it going on with the locked in Panazzo brothers and DeYoung prior to succumbing to soft-rock (which definitely happened).

A few notes… there are some South Side of Chicago stories from my life growing up (Video City in Oak Lawn baby!), and a BUNCH of bonus content that we didn’t get to on the air.  Bonus Content starts at 11:50 with Robb talking about prog rock bands have 2 camps when it comes to lyrics, followed by 2 more musical examples (The Who and the Allman Brothers, my comparison of Styx to Queen (I unfairly said Queen was an influence…they were putting out debut albums right around the same time), and stories about Ted Nugent poking fun at Dennis DeYoung. Bonus Content 2 starts at 19:10 with Robb and I going off the cuff talking about bands doing cover songs, and the right and the wrong way to go about them.  In hindsight, I may be a little too harsh on Billy Joe Armstrong from Green Day about this song.

For more on Styx…

If you haven’t seen Jimmy Fallon and Paul Rudd geek out on this video reincarnation, you’re in for a treat!

A cool show Tommy did solo with a Contemporary Youth Orchestra in Cleveland.

And something needs to be done about Dennis DeYoung’s eyebrows!