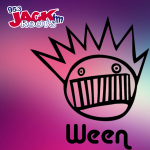 Ween is by far the most ‘out-there,’ indie artist we’ve ever featured on Roots (definitely Robb’s choice!).  I’m not going to give away too much of my thoughts on the band or their music…you’ll have to listen to the show!   But I’ll keep it short and say, give this a listen!  They’re much more than Push th’ Little Daisies, especially LIVE!   There’s a bunch of BONUS CONTENT that begins at 10:18 including expanded thoughts from Robb on why he recommends starting with White Pepper.

We played ‘Ocean Man’ from The Mollusk on the show today.  You can hear that song here, or better yet, watch the ENTIRE concert featuring that song below!

Here’s a cool video of Dean Ween talking about the only 2 solos he knows.

The show featured a clip from Beavis and Butthead where they’re making fun of Ween with ‘Push th’ Little Daisies,’ but Mike Judge was actually a fan.  Check out this clip!