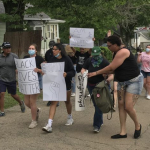 Around 300 people formed a walking rally in LaSalle yesterday afternoon to protest police brutality against minorities:

One of that event’s organizers identified herself as Sarah Berg.

The people who joined the walk from the LaSalle fire station to the police station and back are white, black, Latino, and mixed race.

In Streator, Angel Patterson of Ottawa led a walk from Walmart to the intersection close to City Hall and back.

About 25 started the march in Streator. It grew to around 100 participants by the time it turned around downtown.

The events in LaSalle and Streator were peaceful. Patterson is planning another rally Tuesday, June 2 at 3pm in Ottawa outside the Etna Rd. courthouse.