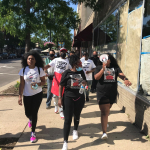 UPDATE: A protest was in the works for LaSalle today, but it has been cancelled due to the weather. Organizer Angel Patterson says she’s trying to plan it for next Wednesday.

A large group of Black Lives Matter demonstrators peacefully marched at the LaSalle County Courthouse and downtown Ottawa Tuesday – despite temperatures that reached around 90 degrees. Protest organizer Angel Patterson said that police need to be better about profiling and harming people of color. Ottawa Police Chief Brent Roalson seemed to be listening. He said coming together is part of the solution.

Another organizer, Darryl Stuggis, said peaceful protesting and changes in police policy are the way to make things better. Tuesday was the second day of peaceful demonstrations in the area.