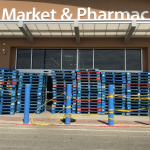 Anxiety and rumors got the best of a lot of people in the area yesterday as they exaggerated ordinary local crime stories into tales of looters coming from outside the area to cause mayhem. People retold the story of a simple burglary at a convenience store in Streator as an example of looting. A domestic disturbance near the Peru Mall got reinvented as agitators from elsewhere throwing baseball bats at people and hitting cars with them.

The Marseilles Police Department issued a notice last night saying it had been getting calls about threats. The department asked people not to spread rumors online. A similar message came from the Macomb police chief, specifically saying that the rumor of busloads of protesters on their way to cause destruction is unfounded.

The concerns prompted some stores to close much earlier than usual and take unusual security measures. Pallets or other obstacles were placed in front of the doors at the Streator Walmart store, which was closed by 3pm, and Rural King in Peru, which had closed by 5pm. Pallets were put in front of the windows at Menards, although it stayed open.