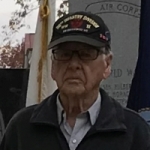 Two weekends from now, a small parade will honor the 100th birthday of a World War II veteran who lives in Ottawa. Francis “Kay” Killelea lives on Evans St. An assembly of his relatives, Ottawa fire fighters, Wallace fire fighters, and Ottawa police officers will meet in the Festivities Unlimited parking lot. They’ll go north onto Poplar St. until they get to Evans St. where he lives.

Killelea served in Europe and the Pacific. The parade organizers are asking local veterans groups to get in on it too.

The parade will be at 9am on Saturday, June 20.