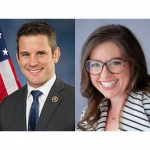 The pandemic continues having an effect on campaigning and holding office. Republican Cong. Adam Kinzinger is asking Congress to quit using Zoom. He says he’s concerned about Zoom censoring on behalf of Chinese authorities and about security vulnerabilities. Kinzinger says pro-democracy activists in Hong Kong and the U.S. have found their Zoom accounts shut down because they shared videos of the 1989 Tiananmen Square massacre.

With so many people expected to vote by mail, candidates like Democrat Dani Brzozowski have more work to do ahead of the election to make a case to the voters. She’s expecting a four-fold increase this fall in the number of people who vote by mail.

Brzozowski says she started her Congressional campaign last September, so she got a good head start.

In other Congressional race news from the past week, Kinzinger joined a call to keep American military members in Germany. He says he commends the United States for wanting to strengthen its position in other NATO countries, but he says we shouldn’t do it at Germany’s expense. Kinzinger says he thinks taking troops out of Germany will cause more harm to American national security interests than to incentivize Germany to step up its contributions.

Brzozowski is having an online pride celebration Saturday night (June 27). It’ll be at 8pm via the Zoom platform. She says there’ll be musical performances, a drag show, and talks from Cong. Sharice Davids of Kansas, writer and activist Charlotte Clymer, and comedian Dana Goldberg.