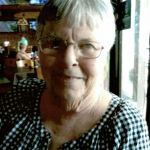 Early morning on June 27, 2020, Heaven gained an angel. Rosemary (Ott) Dettore passed away at her son, Michael’s, home surrounded by her family and great-grand pup, Max. With arms spread wide, Rosemary entered heaven and was reunited with Vincent Angelo Dettore, her loving husband of 60 years! Together they moved to
Naplate and raised four children, Vincent, Greg, Dawn and Michael.
Rosemary was born June 3, 1941 and grew up in Marseilles in her early life and later moved to Naplate, which is here she lived nearly her whole life. Rosemary was often known as “Head”, a nickname she developed from her hairstyle that nobody else could rock! Her first job was a welder in Mendota, later on she became a waitress, and her final job was as a photo clerk at Walgreens. She enjoyed getting together as a family and would always try attending all her grandkids’ sporting and school events. Most of all she loved watching the baseball games!

Rosemary was a Cubs fan at heart and would always watch every game! She loved spending time with her friends, who quickly became her sisters, Sandy Panko and Carole LeBeau. Together they would all go out on fishing trips and attend a wine festival or a couple of nights out. There wasn’t an adventure they would not do
together.

Rosemary was born and raised Catholic and attending St. Mary’s Church. One thing everyone could agree on was that she loved Christmas! Something about bright lights and ornaments always made her heart smile. Although she would have her Christmas decorations almost two months in advance…going to her house and seeing how nicely everything looked decorated was always something to look forward to. Some of the best family parties were hosted at Rosemary’s house whether it was a birthday pool party or a Thanksgiving dinner.

Rosemary spent her last few years with her daughter in Florida enjoying the warm sunshine and her good talks with Pat. Her final moments were spent back in Illinois, as she slowly gave her final goodbyes to all her loved ones. Rosemary touched many hearts and lived a long, beautiful life full of happiness and countless adventures.

Funeral services will be Noon Wednesday, July 1st at Gladfelter-Roetker Funeral Home with Father Matthew McMorrow officiating. Visitation will be from 10:00 AM till Noon Wednesday at the funeral home. Interment will be in Oakwood Memorial Park. She is survived by her children, Vincent Dettore of Tampa, FL, Gregory (Jodee) Dettore of Naplate, Dawn Dettore of Umatilla, FL and Michael (Rosa) Dettore of Montgomery, IL. She also leaves grandchildren, Miranda,
Timmy, Briar, Tyler (Shiane), Nadalie, Michael, Brooke, Cassie (Adam) and Cody; and great-grandchildren, Pierce, Collin, Mason, Ethan, D.J., Lisa, Sophia, Vincent, Wynter and Hunter; and many nieces and nephews.

She was preceded in death by a grandson, Jon David; and four brothers, William, Robert, Jack and Richard Ott. Memorial contributions may be directed to the family. To share a memory, please visit www.gladfelter-roetker.com or Gladfelter-Roetker Funeral Home on Facebook.