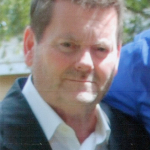 Visitation will be 10 am to noon, Thursday, July 2 at Ottawa Funeral Home. Funeral services with military honors will follow at noon at the funeral home, with Deacon Ray Fisher officiating.

George was born June 26, 1955, in Elizabeth, NJ, to George W. Robertson and Sofie Harris. He married Sheila Martin on September 21, 1974 in Newport, RI. George enjoyed watching game shows on TV, especially Golden Girls, Wheel of Fortune, and Jeopardy. He always talked about numbers and how they would relate to things and people. If you told him your birthday, he would remember it forever.

George could make friends easily as he loves to chat and tell jokes that everyone finds funny (except Sheila because she’s heard them tons of times). George’s life was a good one; he was always very helpful to everyone and worrying about his family and friends, even during the last months. He always had a lot of faith in where he was going after he left this world, and knowing one day he will be together with his whole family again. He had a lot of love to give, and even though he’s not here anymore there’s still lots of love from him to go around.

He is survived by his wife of 45 years, Sheila; one son, George (Sue) Robertson, IV; three daughters, Diane Estrella, Denise (Mike) Hastings, and Crystal Robertson; 13 grandchildren; 14 great-grandchildren; and one sister, Lynn Gold. He was preceded in death by his parents, his grandparents, and one sister, Diane Rhodes.

Memorials may be directed to his family.