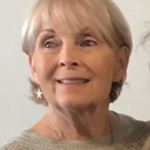 Linda Kathleen Anderson, 73, of Seneca, Illinois passed away Friday, June 26, 2020 at her home, surrounded by her loving family, after battling cancer for four years.

Linda was a gentle soul that lived very simply. Her request was a small, private memorial service with her immediate family. Memorials may be directed to Stavanger Lutheran Church. Osborne-Nelson Funeral Home in Seneca has been entrusted with arrangements.

Linda was born on April 28, 1947, in San Francisco, California to John and Geraldine (Spence) Lynch. She was the second of six children. She graduated from Seneca High School in 1965. Linda married Wayne Anderson of Seneca on October 12, 1967 and had three children; Bradley, Kathleen, and Theresa. In 2005, Wayne and Linda moved to North Port, Florida. They lived there for 12 years and returned to Seneca in 2017. While in Florida, Linda pursued her passion and chose to work in the garden center at North Port Walmart, a job that filled her with so much joy. She made so many dear friends there and referred to them as her Walmart family.

Linda was an amazing woman. Not only did she always make her family feel like they were her number one priority, she was also an expert gardener, she loved watching the sunset at the beach, and she had a great love for nature. Everyone who had the honor of knowing Linda would say that she was an absolute sweetheart who had a contagious laugh, and that she was loved by all. She had such a love for life.