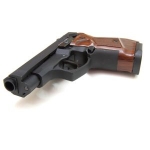 The bullets didn’t hit anyone, but one man was hurt while running away after shots were fired at a house in Peru Monday night. Police Chief Doug Bernabei says things could have been much worse, because there were many people, including children, in the home in the 2100 block of Market St.

Thirty-four year old Semaj S. Jones of Spring Valley is charged with reckless discharge of a firearm and aggravated assault. Bernabei couldn’t say this morning what led Jones to allegedly fire the gun.

The man who was hurt had fallen down a ravine, reported the shooting at the LaSalle police station, and went to Illinois Valley Community Hospital.