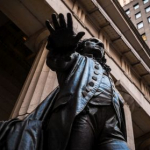 The comment from Carlson came after Duckworth said she thinks there should be a national dialogue on what to do with monuments to presidents George Washington and Thomas Jefferson, who both owned slaves. Brzozowski says patriotism means wanting a country that takes care of its people. She’s running for Congress in the Illinois 16th District against incumbent Republican Adam Kinzinger.