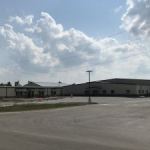 The LaSalle County Highway Department began moving into its new building Wednesday. But it may be a few months before the building is fully functional. Until it is, the contractor won’t get all the money it’s to be paid.

Highway Dept. Engineer Don Ernat told the County Board Thursday, 10% of the $3 million cost is being held back until the contractor finishes. Things were supposed to be done by late March, but there have been delays in receiving some materials including doors and lockers.

The new building replaces buildings heavily damaged or destroyed in the 2017 tornado that went through Naplate and Ottawa. The LaSalle County Nursing Home, next door to the Highway Department, closed for a few months in 2017. It was possible to repair the tornado damage there without replacing the building.