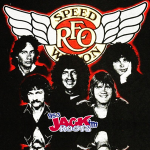 We’re the type of station that plays the WAGON, so dentists in Missouri should be listening if they’re on vacation to the area!  That’s an Ozark, the Jason Bateman Netflix show joke.  If you’re not watching Ozark, what’s wrong with you!  And even if you don’t, you’ll understand that reference a little more after you listen to today’s episode. BONUS CONTENT starts at 10:00 and includes a great discussion on how REO Speedwagon may have created the template for Pop Country into the 90s/early 2000s.

Something we probably could’ve touched on more during the episode, how great of a guitarist Gary Richrath was!

And I’ll leave you with that time that REO let Pitbull interpolate ‘Take it On the Run’ (a Richrath song) for his song ‘Messin’ Around’ and REO performed with him.  Maybe it’s just me, but it feels wrong to hear Kevin Cronin sing ‘we can hit the crib if you want to.’ I wonder what Richrath would’ve thought of this.