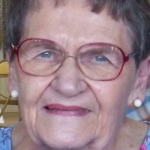 Charlotte Corcoran, 91, of Savoy, formerly of Earlville, passed away on Tuesday morning, July 28, 2020 at the Champaign Urbana Nursing and Rehab.

Charlotte was born on April 3, 1929 in LaSalle to Andrew J and Ellen (Coughlin) Safranski. Her mother died when she was two years old and she was then raised by loving aunts and uncles, in LaSalle. She was a graduate of L-P High School, and worked at Westclox, in Peru. Charlotte married Robert J. Corcoran on November 19, 1949 at St. Patrick’s Church, in LaSalle. They later settled on a farm south of Earlville, where they farmed for 49 years. During those years Charlotte also worked at Marathon Electric in Earlville for 22 years. When they retired from farming in 1998, they moved into Earlville for 10 years. She was a member of St. Theresa Catholic Church, in Earlville. In 2008 Charlotte and her husband moved to Savoy to be close to their daughter and family.

She was preceded in death by her parents, her husband, on February 8, 2015 after 65 years of marriage, a sister, Margaret Liss, and two brothers Edward and Andrew Safranski.