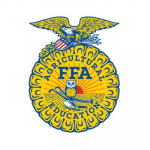 Despite not having the annual LaSalle County 4-H Show and Junior Fair, which always had the Section 7 FFA competition on the first day of fair week, the Section 7 FFA students were able to have a two-evening competition at the Seneca High School Land Lab. With the results are the Section 7 Reporter – Levi Maierhofer of Seneca, Section 7 President Kara Freebairn of Serena, and Section 7 Treasurer Ben DuMais of Woodland.

Section 7 FFA held a two-day Supervised Agricultural Experience Exposition recently at the Seneca High School Land Lab.   The Expo was conducted with strict safety regulations in place due to concerns over Cover-19 that was responsible for the cancellation of traditional fairs throughout the midwest.   Only one species was allowed on the grounds at a time, masks were required by exhibitors, and each student was allowed only one guest. There were over 250 exhibits during the two days.

Fair organizers were very appreciative of the LaSalle County Junior Fair Board who sponsored the outdoor sanitation facilities.   Also, Siedentop Showpigs and Brothers Country Supply for providing the wood shavings for the show arena.

Below is a review of the winners.

Swine showmanship was won by Hailee Dannenberg.  Others exhibiting swine included Carter Westphal and Gwyneth O’Connell of Newark, Jessica Carlson of Somonauk, and Hueston Willson and Jaiden Mahler of Serena.

Angus also won the sheep showmanship class with Zoran being the runner-up.

Meat Goats – Hueston Wilson of Serena and Ella Robson of Seneca were the meat goat exhibitors.   Wilson had the Grand Champion meat goat and Robson the reserve with their yearling does.

Dairy Goats – Jessica Carlson of Somonauk exhibited a very competitive string of dairy goats and claimed all of the awards and grand champion honors.

Breeding Beef – Jaiden Mahler of Serena had the Grand Champion Beef Female with her Angus heifer and Kara Freebairn of Serena had the reserve grand champion with her simmental heifer.   Other breed champions were Cole Freebairn in the crossbred division, Wayde Collins of Mendota with a Hereford, and Jolie Johnson of Newark with her Angus and  “all other breeds” heifers.    Reserve champion breed champions were Wilson Widman of Seneca with a Hereford, Ally Utegg of Ottawa with a Shorthorn, Kara Freebairn, crossbred, and Cole Freebairn, all other breeds.

Kara Freebairn of Serena won the beef showmanship award with Wayde Collins of Mendota being named the runner-up.

Rabbits – Three students exhibited rabbits with top honors going to Bradley Armour of Serena as he won both Best of Show and Best Opposite with his buck and doe respectively.  Madison Bromberek of Seneca and Benjamin DuMais of Woodland were the other rabbit exhibitors.

Poultry – Best of Show in the poultry division was claimed by Emma Smith of Seneca with a beautiful pair of ducks.   Smith also exhibited the champion meat bird and the champion turkeys.

Other poultry exhibitors were Madison Bromberek and Spencer DeGraaf of Seneca and Taylor Austin of Streator.