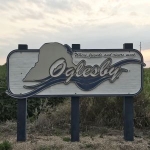 Some people in Oglesby have noticed their electric bills are up. Mayor Dominic Rivara says that’s because of more energy use. It’s been hot and people are running their air conditioners.

What the city pays for electricity that it resells to city electric customers is going up too, but that’s probably temporary because of summertime rate fluctuations. City Commissioner Jason Curran answered a question at this week’s City Council meeting about whether the city will raise rates to make up for it.

Curran says the rate study is looking good. It may turn out well enough to lower the rates, but he won’t promise that.

A woman who gave public comment via telephone at Monday night’s City Council meeting asked the city not to raise electric rates. She says high water and sewer rates are already making things hard. She claimed to have a bill for more than $100.

Curran says that’s a very high residential water bill and not like anything he’d expect in Oglesby. Curran and Mayor Rivara told her they’d help her look into whether there’s a leak at her house.

Curran said many times, when a water bill goes up, a leaky appliance is to blame and a second toilet that isn’t used much is a common culprit. Worn out, dirty, or corroded parts can let water flow from the source to the drain without any water escaping the toilet and without anyone hearing the continuous sound of just a little water running.