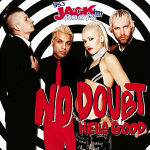 We wrap up female artists month with No Doubt.  Ok yeah, there’s only 1 girl and the rest guys, but Gwen Stefani has been the focal point of this band since 1995.  Notice I say since ’95 because before Tragic Kingdom, the band’s focal point was probably Gwen’s older brother, Eric.  It’s almost like there have been three different iterations of the band (listen to the episode and you’ll hear us explain).  Of all the bands we’ve done on Roots, this was probably the one I had the complete wrong idea in my mind about the band.  Sure I knew all their hits and some of their story.  But I was expecting a lot more Ska and Punk than what’s really there.

And here’s something I was talking about during the episode on the return to relevance of Matthew Wilder’s hit ‘Break my Stride.’  He produced No Doubt’s Tragic Kingdom.