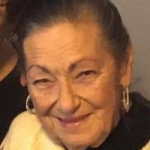 A memorial service will be held at 3 p.m. on Monday, September 14, 2020 at the Mueller Funeral Home in Ottawa, with Rev. Michael Driscoll, Pastor of St. Mary’s Church in Utica. Visitation will be from 1 to 3 p.m. at the funeral home.

She was preceded in death by her parents, her husband Stanley, and two sisters, Jvonne Crutcher and Jodene Retoff.

In lieu of flowers memorials may be directed to the family.