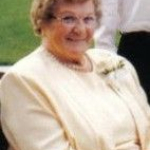 Private family services will be held. She will be buried at St. Columba Cemetery in Ottawa. Ottawa Funeral Home & Crematory has been entrusted with arrangements.

She worked for 34 years along side her husband in their family owned grocery store, Datti’s Food Store in Ottawa. Edith was a loving mother and grandmother and she loved gardening. She was a member of St. Columba Church.

Memorials may be directed to LaSalle County Nursing Home.