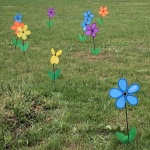 Ottawa joins national effort in bid to cure Alzheimers. Jeff Hetrick, Executive Director of the Ottawa Chamber of Commerce spoke about the hope.

Saturday morning, about a dozen people whose lives were affected by Alzheimers gathered under a steady drizzle in Jordan Block Park. That’s where the Alzheimer’s Association held an event to raise money to cure the disease. The “promise garden” planted there covered just about half the grounds.

A purple plastic flower planted represented a loved one lost to the disease. Yellow represented a caregiver who suffered alongside their parent or spouse. Blue or Orange represented a person still struggling with Alzheimers but able to function with it.

All proceeds of the walk go to curing the disease.