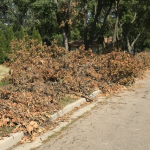 Progress isn’t fast enough for some people as Ottawa city crews pick up branches that were downed all over town during the derecho last month. City Commissioner Marla Rodriguez says the work is ongoing.

Rodriguez asks for patience and says there are also four yard waste dumpster sites across the city for residents to use. Commissioner Tom Ganiere says there are 119 miles of streets in the city and nearly every one had branches down after the storm. He says the city crews are doing a great job.