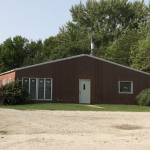 The Ottawa City Council has tabled a zoning change request for Whistle Slots Neighborhood Pub and Gaming Parlor. Commissioner Wayne Eichelkraut says he wants to look into some of the things people have brought up since it last went before the Council two weeks ago. Opponents spoke again last night against what they believe will be a poor fit for their mostly residential neighborhood on Champlain St. Commissioner Tom Ganiere says he’d like the city to look at the list of uses allowed in each zoning category and consider if some of those things really belong together. The issue will come up again on October 20th.