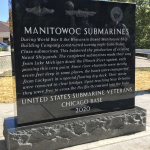 Twenty-eight submarines built in Manitowoc, Wisconsin went by Morris on the way to the Gulf of Mexico and ultimately the Pacific Ocean during World War II. Four were lost in action.

Mayor Richard Kopczick says it’s an honor to have the memorial in his city.

The Submarine Veterans USS Chicago Base put the monument southwest of the Grundy County courthouse by the Illinois and Michigan Canal. You can hear all of the dedication event here:

St. Rep. David Welter says it’s a beautiful monument that that recalls a time when America came together. Cong. Adam Kinzinger described how hard it was to serve on a sub for months at a time and how special the men who have done it are. They and others were there for the unveiling Saturday.