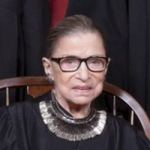 A lot of Democrats say they’re afraid about what may happen if Pres. Trump appoints a conservative to the Supreme Court. And they’re critical of Senate Republicans who are ready to approve a nominee right away, even though they insisted the better part of a year was a rush when Pres. Obama nominated a justice in 2016. Brzozowski says it shows the hypocrisy in Washington.

Cong. Adam Kinzinger, on WCMY’s Morning Meeting Wednesday, said any president would be right to nominate a judge to the spot. But he’s not saying the Senate was wrong either time.