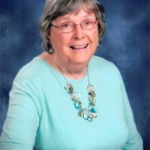 Barbara was born December 3, 1929, in Ottawa to John and Frances (Boomer) Haraldson. She married Arthur Cunningham on March 27, 1948 at Trinity Lutheran Church in Ottawa; he passed away July 17, 1985.

To say that Barb lived a long and fulfilling life, was an understatement. Barb was born and grew up in Ottawa, but was sent to live with some Aunt’s in Durand, IL due do a fire that destroyed the family home when she was young. This formed the core of her life’s philosophy. Separated from her siblings for this short time, who were also living with other family members, it helped her know who her family was, and where they came from, and that they could be counted on when needed. She never hesitated to tell us how extremely proud she was of her Norwegian heritage, (her grandfather’s name was Thor!) and was a member of the Sons of Norway.

So she had learned early that you could always rely on family for stability, and this would be a key influence as to how she raised us. When she met our Dad, and married at the ripe old age of 18, they combined their philosophies, and tried every day to instill that into their children. Mom’s strong sense of family and responsibility, and Dad’s sense of kindness and consideration formed the basis; the fact that they both loved music and singing, and thought laughter was so important to keeping a sane household, was a nice bonus. Their love for each other was evident every day, they taught their children by example, and we never wanted for anything. Maybe they took to heart this old Norwegian proverb: He who laughs…lasts.

After marrying Dad, they settled down to the business of raising a family in Ottawa. Dad at the Piggly Wiggly (later Thompson’s Food Basket) and mom taking care of the house and kids. Dad then started into house building, and soon after, became a firefighter, eventually moving into the Chief’s position.

Mom decided to channel her energy in different ways. She took up oil painting, and displayed a real talent, even winning some awards. We still have several of her pieces in the family, but she gave a lot of her beautiful pictures away to friends.
She and dad both joined the local Barbershop and Sweet Adelines choruses, and like everything they did, they jumped in and gave it all they had. Mom was even a member of a Championship Quartet, and traveled to the International Competition in 1980. They both formed lifelong friendships in these groups, and every one of her children still love the sound of 4-part harmony. Whenever we hear it to this day, we are overwhelmed with a feeling of love, fellowship, laughter and peace. Mom had a little plaque above her kitchen sink that said, “God respects me when I work, but he loves me when I sing!”

She had one of the loudest whistles and never hesitated to use it! Whether she needed to rein in her kids, or get your attention, or simply wanted you to know that she still had the floor! It was the “call to come home” when we were little, and even the neighborhood kids respected the whistle!

She was an avid bowler and golfer. She was a prolific photographer, and as archaic as it sounds today, she printed every photo, put them in albums, and labeled them all. It was a prophetic gesture, for later in her life, as her memory waned… these photos were a constant form of pleasure for her, and a treasure for us.
She kept beautiful gardens, particularly at her home on Catherine St. in Ottawa, where she lived after our Dad died in 1985. She turned her back yard into a sanctuary that defied descriptions over the years, and kept alive her love of working in the dirt.

She worked for over 20 years at Jordan Hardware in Ottawa, and was one of the first women to work in the hardware department. And because she loved it so, you would often find her in the Garden Department, and pretty much took that over.

She also traveled extensively with her friends after our Dad died, and took several trips to Europe with our sister Deb. She kept journals of her daily life for years, and kept travelogues of all her trips.

She was a lifelong member of Trinity Lutheran Church, long time member of the Trinity Choir, past Church Council and Marie Peterson Circle.

She was an active member of the American Legion Ladies Auxiliary, and carried her card proudly.

She was also a Die Hard Cubs fan, and celebrated with all of us in 2016!

She is survived by five daughters, Ann Walleck, Debbie (Bob) Koerner; Mary (Don) Heider, Jeanie (Terry) Ruhland, and Susan (Randy) Denen; one son, John (Daphne Mitchell) Cunningham; thirteen grandchildren, and fourteen great-grandchildren. She was preceded in death by her parents, her husband, her sisters and brother, and her son-in-law, Les Walleck.

Pallbearers were her grandsons and great-grandsons.