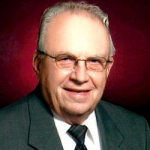 Elmer Leonard Both, Jr., 88, of Marseilles, passed away, October 9 at Lakeview Hospital in Stillwater, MN.

Due to current circumstances, funeral services will be private at Trinity Lutheran Church in Marseilles with the Rev. William Chormann officiating. Burial will be in Riverview Cemetery in Marseilles with military honors. Seals-Campbell Funeral Home is handling the arrangements.

He graduated from Marseilles High School. He served in the U.S. Army in Korea and was a member of the Ottawa VFW Post # 2470. Elmer was employed by Caterpillar until his retirement. He was a lifelong member of Trinity Lutheran Church in Marseilles. His passions in life were summers at his cabin in Wisconsin, riding the Northwood trails in his UTV, fishing, hunting, trap shooting, NASCAR and family.

He was preceded in death by his wife, Barbara; his parents; a sister, Dolores Belletini; a brother-in-law, Jack Belletini; and sisters-in-law, Sharon Both and Lorraine Both.

Memorials may be directed to Trinity Lutheran Church in Marseilles or the Ottawa VFW Post # 2470.