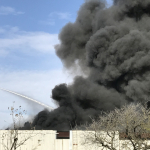 A man watching fire fighters put out the fire at Cimco Recycling Wednesday morning says he believes he saw a welding tank fly into the air when it started. James Cooper says he’s done welding and is familiar with such tanks.

The fire was in the southeast building on the Cimco property. The Ottawa Fire Department used its tower truck to spray water into the building while a claw machine tore scrap piles apart. The Wallace, Marseilles, and Grand Ridge fire departments hauled water from hydrants to a portable pool for the Ottawa hoses to draw from.