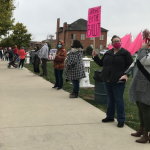 The people who don’t like federal Judge Amy Coney Barrett believe she’ll take part in opinions against the rights of women and the LGBTQ community. They also don’t like that Senate Republicans blocked an Obama nominee but went ahead with a confirmation hearing for a Trump nominee–each in different election years. And she didn’t answer a lot of questions during her hearing.

The hearing may not make a difference to Republican Senators who started it ready to vote for her and Democratic Senators who were already ready to vote against her. Rachel Dutton, one of the organizers of an anti-Barrett rally in Ottawa Saturday says seating her on the court will invite trouble.

About two dozen people, mostly women, held signs on Ottawa’s Jordan Block Saturday for the No Confirmation Before Inauguration rally. Nicole O’Shea, another of the event’s organizers, says numerous rallies were held across the country to signal that they don’t like Barrett getting a Supreme Court nomination hearing already.

Many of the rallies were held under the name Women’s March. In some places, but not Ottawa, there were counter-rallies called March for All using a slogan of “I’m with her”. They were organized by conservative women.