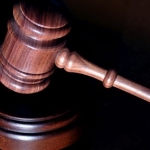 Julian A. Hamill of Ottawa is serving two years on court supervision for a battery charge he pled guilty to. Aggravated battery with a deadline weapon was dismissed in a plea agreement. Hamill was arrested after someone was stabbed on Ottawa’s south side in June 2019.

Dylan Duffield of Streator is beginning two-and-a-half years on probation for aggravated battery with a deadly weapon for a stabbing in Streator back in March. Both men are 24 years old.