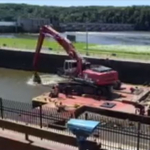 A new Starved Rock lock is about to reopen.

There was some initial work done at the Starved Rock emergency gates last summer. This year that work was completed and new main gates were added.

All five major locks including the above mentioned and Starved Rock, Marseilles and Dresden measure 110 by 600 feet.

Ideally to improve speed of transit on the river, the lock should measure about 1200 feet in length. Upgrading to that length may come sometime down the road when more federal money is available.

Until then the locks are much more reliable and safer against emergency closures.

The US army corp. of engineers undertook a major repair of the five main locks on the Illinois River this summer. Most were originally opened in the 1930’s. Those are La Grange, Peoria, Starved Rock, Marseilles and Dresden locks and dams.

The Starved Rock lock repairs include new upper and lower miter gates which are a pair of steel gates that swing out from the side walls and meet at an angle pointing toward the upper level.

Improvements would have meant making the locks 1200 feet in length. They are currently all 600 feet long. That upgrade may happen sometime in the future now that the Ohio River lock system has been upgraded and more federal funding becomes available.