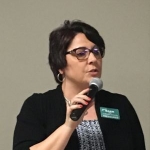 Baer came out with her diagnosis in June. She was reluctant to at first, but then heard from friends who’d been putting off mammograms. Baer said women shouldn’t delay that.

Baer is a Democrat running against Republican Stephanie Thompson.