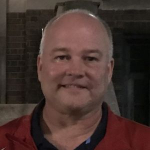 Some people might wonder why teacher Tim Burgess wanted to return to Ottawa High School if the administration has treated him as badly as he says. After a five-year court battle, Burgess walked into OHS this school year a teacher again but without having settled all the issues from being fired.

He’s not planning on being there long; he’ll retire on December 18th. But he says it was important to return to teaching instead of just going away.

There is a court case pending in which Burgess alleges a conspiracy and defamation.