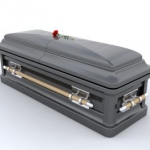 A former Streator funeral director, 52 year old William BJ Elias, could not be in court Thursday due to health issues.

Elias allegedly pocketed money that clients gave him to pre-pay their funerals.

He was released from the hospital Thursday morning at 4AM for an undisclosed illness and could not physically stand before Judge Cynthia Raccuglia.

A November 19th court date was set Thursday to determine what needs to be done next in the case.