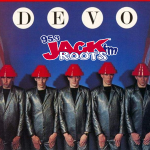 If all you know of DEVO is ‘Whip It,’ after you listen to this week’s show and consume all the goodies below, I hope you take some time and listen to some more DEVO (Are We Not Men, We are Devo, or Freedom of Choice would be good starting points)!  I knew a few more songs than their ‘one-hit-wonder,’ but doing a deep dive for this week’s show was very rewarding.  Their sound was very important to the overall movement of New Wave, and traces of Devo influence can be heard all over the 90s and especially the early 2000s alt-rock movement.

If you listening to the show on the air, BONUS CONTENT start at 10:30 and is marked by the WCMY logo in the audio file.  We talk about what happened to the band after Whip It, their great 2010 return, some funny things the band did, and unfortunately, COVID.

And since we mentioned Neil Young’s song ‘Ohio’ in the formation of the band, let’s not forget that Neil was a fan and included them in his film, ‘Human Highway!’  Check out Devo with Neil doing Hey Hey, My My with Booji Boy on vocals!