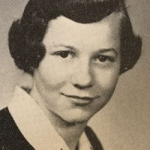 Marcia Lou Reed Little, age 90, of Ottawa, Illinois walked into the arms of her Lord and Savior on the morning of November 11, 2020 while at home surrounded by her children and grandchildren.

A one hour visitation will be held at Gladfelter-Roetker funeral home starting at 10:00 am Saturday, November 21 with a funeral service immediately following the visitation. Pastor Charles Richardson will be officiating. Burial will take place at Ottawa Avenue Cemetery.

She graduated with a Bachelor of Science in Education from Western IL University in 1952 and was a member of Pi Kappa sorority. She taught at the high school level for several years and later went on to be an Area Sales Manager for World Book Encyclopedia. She also spent many years as the secretary for First Presbyterian Church in Ottawa.

Marcia Lou was a long time member of the Marseilles First Baptist Church where she participated on several church committees and served in numerous capacities. More recently she attended First Christian Church in Morris. She also enjoyed traveling, playing board games, especially Scrabble, solving crossword puzzles, reading, cooking and entertaining her family and friends. Her family was her main focus. Her greatest joy was spending time with her grandchildren.

Memorial contributions may be made to: Feed My Starving Children (740 Wiley Farm Court, Schaumburg IL 60173) or online via FMSC.org. To share a memory or condolence, please visit www.gladfelter-roetker.com or Gladfelter-Roetker Funeral Home on Facebook.