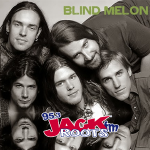 This week’s Roots is on Blind Melon, a band that could’ve been a lot bigger than they were.  But their story came to an all-too-common ending cut short by tragedy and the death of their gift lead singer with a very unique voice, Shannon Hoon.  The band tried to carry on without him, but it took them a decade to find a replacement.  Their album from 2008 is pretty hard to find online.  They released a few new songs earlier this year (see below) and were supposed to have a full album and tour, but 2020 sucks and you know the rest.

Blind Melon was the musical guest on Letterman the day Kurt Cobain’s body was found.  Reading the comments from the Youtube post of this video from those in attendance, there were rumors circulating outside the theater that Kurt had died, but back in 94, pre-internet and smartphones in your pockets and purses, you didn’t know for sure.  Letterman taped in the late afternoon.  Seeing Shannon come out with a ? on his forehead was almost confirmation and then he said something brief at the end of the performance.  Unfortunately, we would have to mourn him less than a year and a half later.

A full show from the Metro in Chicago less than a month before Shannon passed.

Hear the two new songs they released earlier this year and check in with the band!