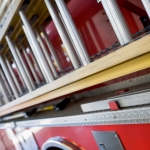 Seneca fire fighters needed just a half hour to knock out the fire at Olson’s Auto Scrap Metal Recycling Wednesday night. They were there for three hours dousing the hot spots.

Johnson says an electrical problem caused the fire. The main building and office were destroyed.

A person driving by the place on U.S. 6 saw the fire and reported it.