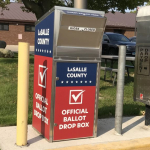 A Grundy County judge is ready to order a recount in the LaSalle County State’s Attorney’s race and the part of the Illinois House 76th District that’s in LaSalle county. The LaSalle County Republican Party will have to come up with some money to pay for it. How much will be discussed during a hearing on Thursday with Judge Robert Marsaglia.

The party thinks it’s fishy that what appeared to be final results on election night weren’t final. At first, it appeared that incumbent State’s Attorney Karen Donnelly and Illinois House challenger Travis Breeden, both Republicans, won. But after more votes were added, Todd Martin and incumbent Lance Yednock won those respective races.

The judge today appointed attorney Matt Krueger to represent the County Clerk. By default, that would be the State’s Attorney’s job. But since who’s in charge of the State’s Attorney’s Office is one of the contested matters, appointing someone else avoids a conflict of interest and lessens the chance of allegations of more funny business if Martin remains the winner. Martin took office as State’s Attorney today.