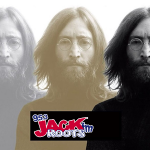 Today’s episode of Roots (a day late) can be summed up with a line from the very end of Bonus Content.  ‘We need more John Lennons in the world.’  Do we ever.  There’s a reason he was the voice of his generation, and frankly, there hasn’t been a voice that has cut through the clutter like his since.

Today’s episode is focused solely on John Lennon’s solo catalog.  There are references to other Beatles and Beatles songs, but how could there not be?  They all were part of the roots that make up what became his solo career.  The 40th anniversary of his passing was earlier this week.  We could’ve really used what would’ve been his 80 years of divine experience and reflection to what is happening in the world today.  But since some nutjob took him from the world so soon, all we can do is look back at the lessons he learned and passed along.  I think we all need another go at a course on Lennonology.  Maybe the world would be a better place.

If you listened to the show live when it aired, BONUS CONTENT starts at 9:49 and is marked by the miniature WCMY logo.  We talk about his best lyrics, the Yoko factor, callbacks to Beatles songs and more.

Next Week Roots:  The Pretenders!