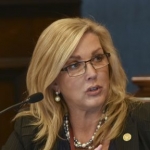 St. Sen. Sue Rezin says she’s honored and grateful to be given a new role in the Republican leadership in Illinois. She’s been named the Deputy Minority Leader in the Senate. Rezin has been in the state senate since 2010 and has been the Assistant Republican Leader. Her new role takes effect on Wednesday when the next General Assembly’s term begins.