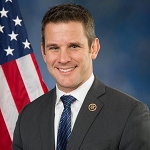 Cong. Adam Kinzinger says he has received threats over saying he’ll vote to impeach Pres. Trump. He says he won’t be intimidated.

Kinzinger said on CBS This Morning, lawmakers should be willing to sacrifice their careers for their principles. He says some of the threats were made via Twitter and Parler.

The Channahon Republican says there’s no doubt in his mind that Trump violated his oath of office by inciting the riot at the U.S. Capitol last week. He asks if inciting a deadly insurrection against the legislative branch isn’t worthy of impeachment, what is?