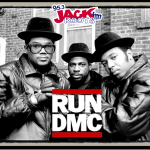 Run DMC were the Kings of a new kind of Rock in the mid-80s.  Their influential raps & Jam Master Jay’s sparse beats revolutionized Hip-Hop and help set the scene in motion for what was to come.  And almost as fast as their start shot up, the fizzled out as new MCs, sounds and styles took over.  In essence, Rap grew up in a hurry.  Bonus content today includes what happened after Run-DMC’s heydays and a comparison to the Beastie Boys, who freely admit were extremely influential on their career.

Sandwiched in between Black Sabbath and Rick Springfield….

I also highly recommend watching Hip Hop Evolution on Netflix.  The third episode of Season 1, ‘The New Guard,’ was about the Rise and Fall of Run-DMC.  Check it out!