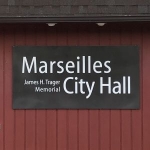 The city of Marseilles is refinancing nearly $3 million in bonds for sewer work. Mayor Jim Hollenbeck says the city can get a lower interest rate and save $156,000 over the next decade. The city is also issuing new bonds for $305,000. The city’s borrowing the money to pay for improvements at City Hall. Hollenbeck hopes to reduce the number of heating units from four to two, do electrical upgrades, and install new windows.