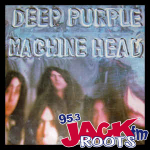 Deep Purple has had so many different iterations (Mach’s as they call them) and have released too many albums to count, so we thought it was better to just focus on the best release, 1972’s Machine Head.  Sure the hits are there, but the story behind the recording and the deep tracks are equally enthralling.  You can hear on this album alone why they belong on the Pillar of the ‘Unholy Trinity’ for Metal with Led Zeppelin and Black Sabbath.

We played ‘Highway Star’ for our Roots song of the Day.  It’s the song that starts off this live concert from 1972.

I love the series ‘Classic Albums.’  You can find most of them on Amazon Prime.  Here’s a cool clip from the episode on Machine Head.

Next Week Roots: The Animals!