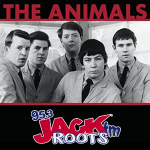 Besides the Beatles, Stones and the Who, we really haven’t dabbled in much from the British Invasion.  The Animals definitely were part of of that movement.  When they arrived in the states for the first time, there was a parade from the airport to their hotel with a throng of screeching girls lined up to see them!  The band itself didn’t stay intact too long.  Instead, Eric Burdon carried on with his name in front of the band and Chas Chandler the bassist went into management and discovered Jimi Hendrix.  And shame on us…something we didn’t mention in our broadcast, Guitarist Hilton Valentine who came up with the iconic guitar picking for ‘House of the Rising Son’ just passed away within the past two weeks at the age of 77.

You could almost do a different episode on Eric Burdon’s later stages of the Animals and then his time ‘fronting’ War?  We touched on them a little as well.

Our Bonus Content this week is about the recently announced nominees for the Rock n’ Roll Hall of Fame.  Here’s a link to read more on the this year’s nominees.

And then there’s this performance which you barely hear the band because of all the screaming .

I couldn’t find any good live performances of House of the Rising Sun.  Back when their version first came out, bands had to lip sync/play to the recording on TV broadcasts.  But I did find this haunting version by Puddles the Clown.

The one song that Eric got right after the original Animals was when he fronted newcomers War.  This song and performance is fantastic.