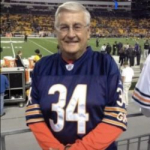 Paul Robert Harmon passed away peacefully at Saint Rose Dominican Hospital in Henderson, Nevada on February 16, 2021 at the age of 75.

Public visitation will be held on Thursday, February 25 from 10 am to noon at St. Columba Church. A mass of Christian burial will be celebrated following the visitation, with Rev. David Kipfer officiating. Due to COVID guidelines, facemasks and social distancing will be mandatory. He will be buried at St. Mary’s Cemetery in Utica. Ottawa Funeral Home has been entrusted with arrangements.

Paul was born in Ottawa, Illinois on May 5th, 1945 to Ambrose and Blanche (McDonnell) Harmon. Paul grew up on the Harmon Family Farm in Utica, Illinois where he attended Waltham Grade School and later Marquette High School where he graduated in 1963. Following high school, Paul began his life-long career in the trucking industry. After dedicating many of his years to driving a big rig for Chippewa Motors, PIE, Consolidated Freightways, and finally the US Postal Service, Paul sought a well-deserved retirement.

Paul left this world a better place by him being in it the last 75 years. God worked through him daily as shown in his compassion towards others and his genuine interest in everybody’s lives. His jovial personality accompanied by his unwavering sense of humor were what made Paul so unique and made being in his presence even that more special.

Paul had a genuine love and admiration for all that this life had to offer. Where others may have overlooked the joy in mundane situations, Paul would not only see the joy and beauty, but he would also have a wonderous story to accompany it. And those who knew Paul well, knew his affection for “story telling”. Paul had a huge love and a deep loyalty for his three favorite sports teams, the Chicago White Sox, the Notre Dame Fighting Irish, and “Da Bears”. He was usually seen wearing one his favorite team’s shirts. He was the biggest sports fan!

Paul took pride in his family. From the early days of being “dad” when coaching all four of his kid’s numerous sports to his later days of being “grandpa” when proudly (and loudly) cheering on his grandkids in all of their athletics. Even though Paul’s family was scattered throughout the United States, he made every effort and embraced every opportunity to see them and spend quality time with them. There just simply are not enough ways to fully express what Paul meant to everyone who knew him and what 75 years of a beautiful life looked like. The admiration and adoration he had for his family and friends was the purest form of love this world has to offer.

The family would also like to extend a heartfelt thank you to the wonderful staff in the ICU at St. Rose Dominican Hospital for the compassion and care they showed to Paul during his battle with Covid-19. They became the hands and hearts of all of us who could not be there to hold Paul’s hand and comfort him. He was loved up until his last moments here.

Memorials may be directed towards the family in care of the Ottawa Funeral Home.