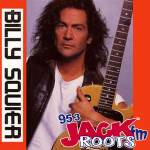 Billy Squier’s career took off like a rocket in the early 80s cranking out arena sized hooks and hits.  On this episode we take a look at the roots for his successful songs (Zeppelin and Queen). The 2nd half of the show is bonus content that focuses more on his decline and why he fell from the limelight.

The video is cued up to ‘Lonely is the Night,’ but the full show is available to watch.  Good quality too.

Here’s his disastrous ‘Rock Me Tonite’ video which many blame for the downfall of his career.  It was listed as the ‘worst music video of all-time’ by people associated with the early days of MTV.  There’s an entire chapter devoted to it in the book I Want My MTV!