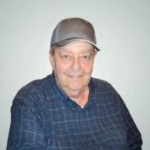 Dale was born on October 13, 1941 in Ottawa to Vernon and Edna (Hallett) Walter.

He is preceded in death by his parents and a sister-in-law Rosemary Walter.

Dale graduated from Ottawa Township High School and Bailey Technical School in St. Louis, MO. He was a member of the Grand Ridge United Methodist Church. Dale farmed with his brothers and his passion was farming and attending meetings to keep up with the latest trends and research on farming. He loved telling jokes to family, friends and even strangers.