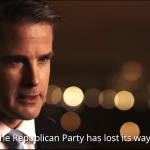 The Adam Kinzinger Congressional campaign has hired a new press assistant. Matthew Rodenwald worked for the Illinois Opportunity Project, which worked to defeat the progressive income tax on Illinois ballots. Among the things Rodenwald works on for the Kinzinger campaign will be the Country 1st movement.

Kinzinger has run afoul of Republicans who are loyal to former Pres. Donald Trump, because he voted to impeach him. The Congressman, who says he was a Trump voter, also says the Republican Party needs to get back to conservative principles instead of being a party just to support Donald Trump.